The recently developed residential community of Daniel’s Keelesdale, conveniently located in the Keele & Eglinton neighbourhood, has completed their first phase of construction which includes residential townhomes and an expansive park space.

With the proximity of this new development close to existing construction and industrial businesses, the Daniel’s Corporation we prompted to add a noise wall to the existing cast in place retaining wall structure in one section and to further build out a noise wall that would separate the entire development, protecting it from unwanted noise disruptions from the neighbouring businesses. HGC Engineering provided acoustical consultation to the team, setting the requirements of the height and type of wall needed to obtain the desired results.

Installation of the new noise wall and adjoining it to the existing retaining wall had some early complications. It was important to the entire team to preserve as much of the natural habitat, trees, and shrubbery as possible. Rather than cutting down trees and making the ground level for easier wall mounting, our engineers had constructed the wall to go around each tree, making for some very tricky angles! While preparing to install the steel posts for the panel bays, the team was met with many tree roots and soft soil. Each time requiring a rework of the plan to stay true to their promise of habitat preservation. Another challenge that the team faced was how to mount the noise wall to the existing retaining wall, and if the existing wall could indeed support the load of the new noise wall system. In most cases, the noise wall is mounted on top of a retaining wall, referred to as a saddle mount. Because the retaining wall was already set in place, Durisol engineering worked with AVG to come up with a different mounting solution as a saddle mount was not possible. “We were able to provide a system that allowed two engineered systems to work together.” Notes Solaymon Ali Ahmadi, Durisol Sales Manager. “As you can see from the photos, a front face mount solved the issue, whereby the posts were anchored into the ground for additional load support and the wall was attached the face of retaining wall.”

The remaining section of the noise wall that did not have a retaining wall stretches 68 metres along the perimeter of the development, enclosing the large park space and playground for the residential community. It serves a dual purpose of a visual barrier and perimeter wall as well as noise abatement from the industrial landscaping yard adjacent to it. Trees, tree roots, and grade differences and soft soil made for a tricky ground install of the steel posts. “Many adjustments had to be made on site, as the team continued to encounter new challenges.” States Kerry Tong, Durisol’s Project Manager “The entire team was kept on their toes during the installation phase but worked well to come up with solutions that all were happy with, including the Owner.” 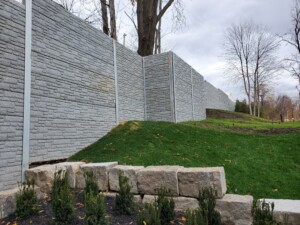 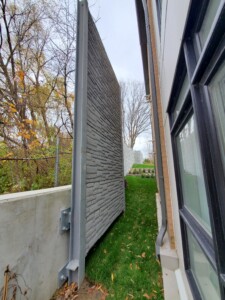 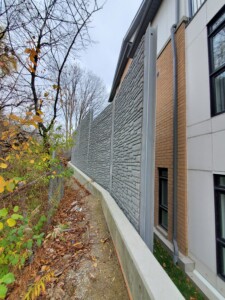 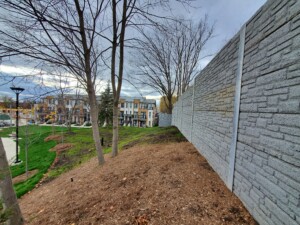